As an addendum to our What to Eat article, here’s some information on packaged meals, covering popular freeze-dried meals available at outdoor stores (e.g. Mountain House, Backpacker’s Pantry) and also military-style Meals Ready-to-Eat, aka MREs.

Let’s start with the more popular option. Freeze-dried meals contain, as the name implies, food that’s been freeze-dried and can be stored for long periods of time, then reconstituted later. Mountain House and Backpacker’s Pantry are two popular brands, each offering 30-40 different meals. Offerings vary greatly, from breakfast to dessert, but a typical meal might be something like Chicken Noodle Casserole or Beef Stroganoff with Mushrooms. 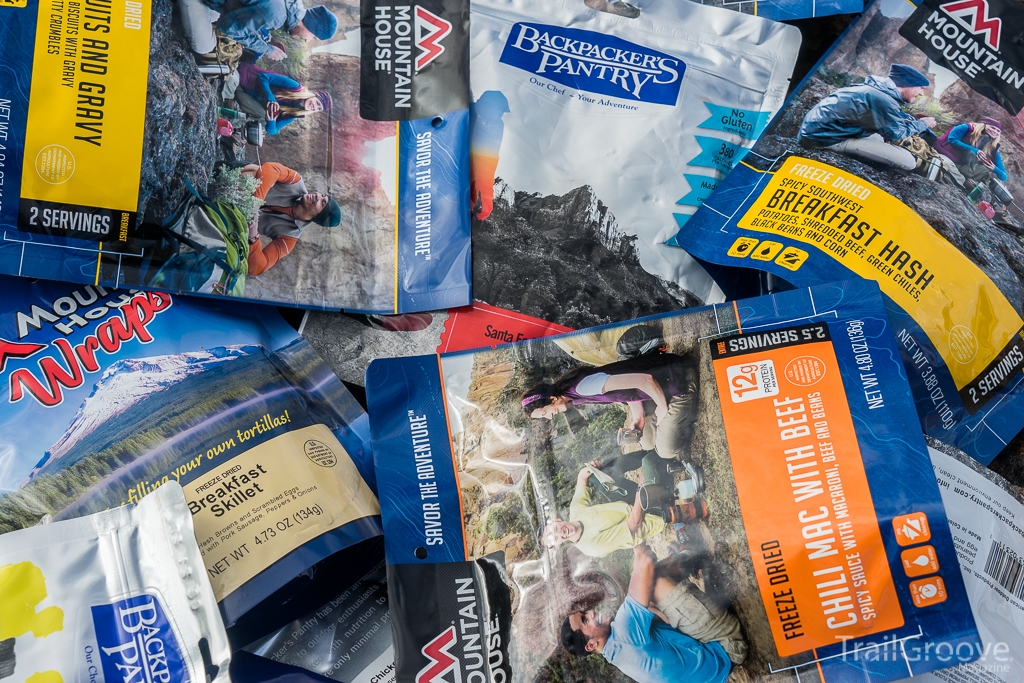 On the trail, freeze-dried meals are some of the closest things you’ll get to “real” food, as they include things that are hard to carry and keep from spoiling, like meat and vegetables. Granted, since everything is freeze-dried, you can’t expect the food to taste particularly fresh, but it’s an improvement over eating a peanut butter-covered bagel for dinner (again!).

For the most part, freeze-dried meals don’t necessarily require heat to reconstitute; a good cold soak will do. However, most of them are meant to be eaten hot, which means it’s best to carry a stove and pot if you want to fully enjoy them.

Freeze-dried meals typically contain around 1,200 calories per package, so depending on your approach to hiking/biking, you’ll typically need to eat about three packaged meals in order to replace calories lost throughout the day. Few hikers/bikers do this, however; it’s more common to eat a freeze-dried meal only once per day and find something else to eat for other meals and snacks.

The contents of a freeze-dried meal are very calorie-dense, since there’s literally no moisture in the product. However, the packaging can cause freeze-dried meals to take up a lot of space in your pack. The package often contains a fair amount of air, and each meal is fairly large in and of itself, meaning packing several meals is less like filling a bucket with sand and more like playing Tetris. There’s inevitably going to be some wasted space in your pack, but at least it’ll be lightweight.

MREs are fairly similar to freeze-dried meals in that they’re meant to recreate “real” food in the field, they’re calorie-dense, and they have a long shelf life. 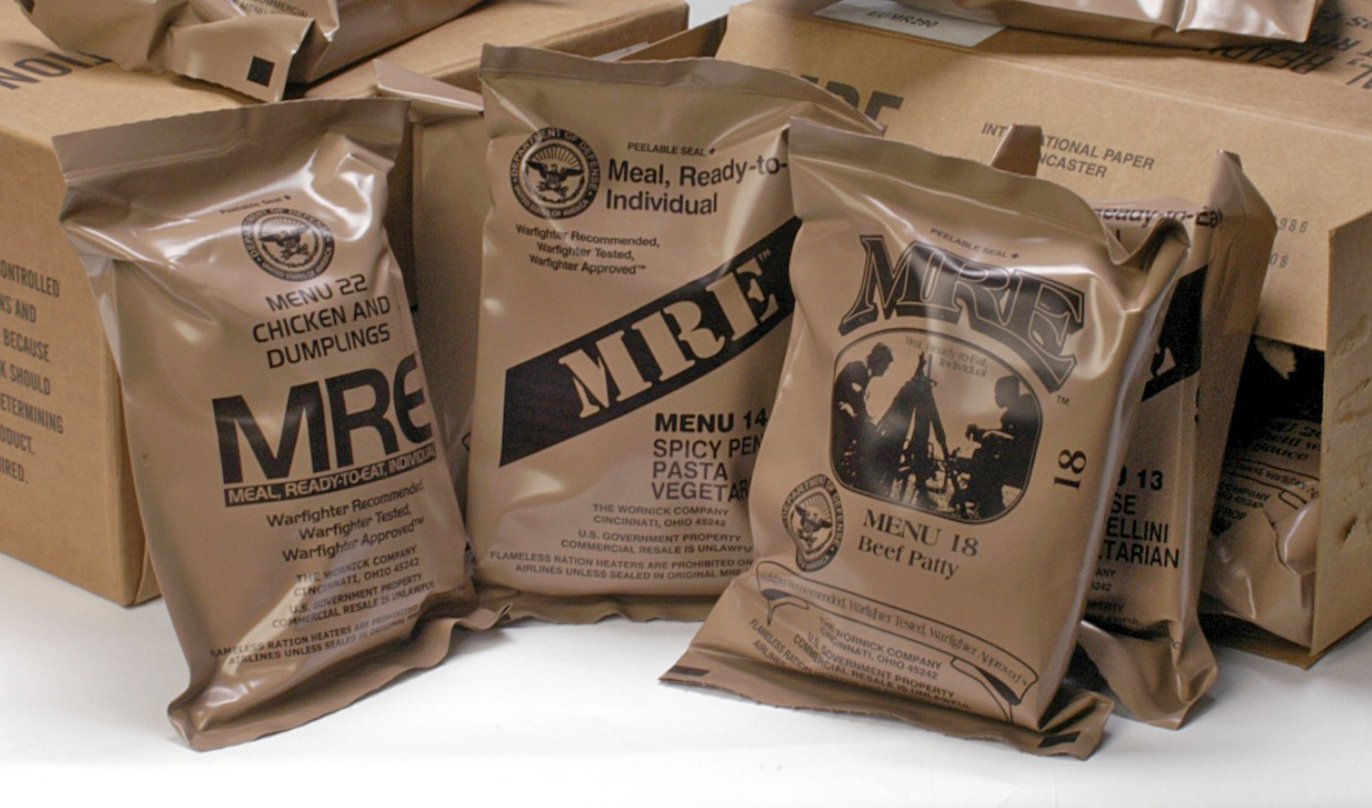 MREs often contain a self-heating device, which reacts to ordinary water and heats your food. No stove needed! The food in MREs is often dry, but is not freeze-dried, and as a result, you should be able to eat everything in an MRE without adding any water (though without a glass of water, you’ll have trouble choking down some parts of it).

An MRE typically contains both an “entree” and a few sides/desserts. A typical MRE might contain a pouch of tuna with noodles (for example), along with a cracker, cheese spread or peanut butter, instant coffee or tea, and a small pack of chocolate. 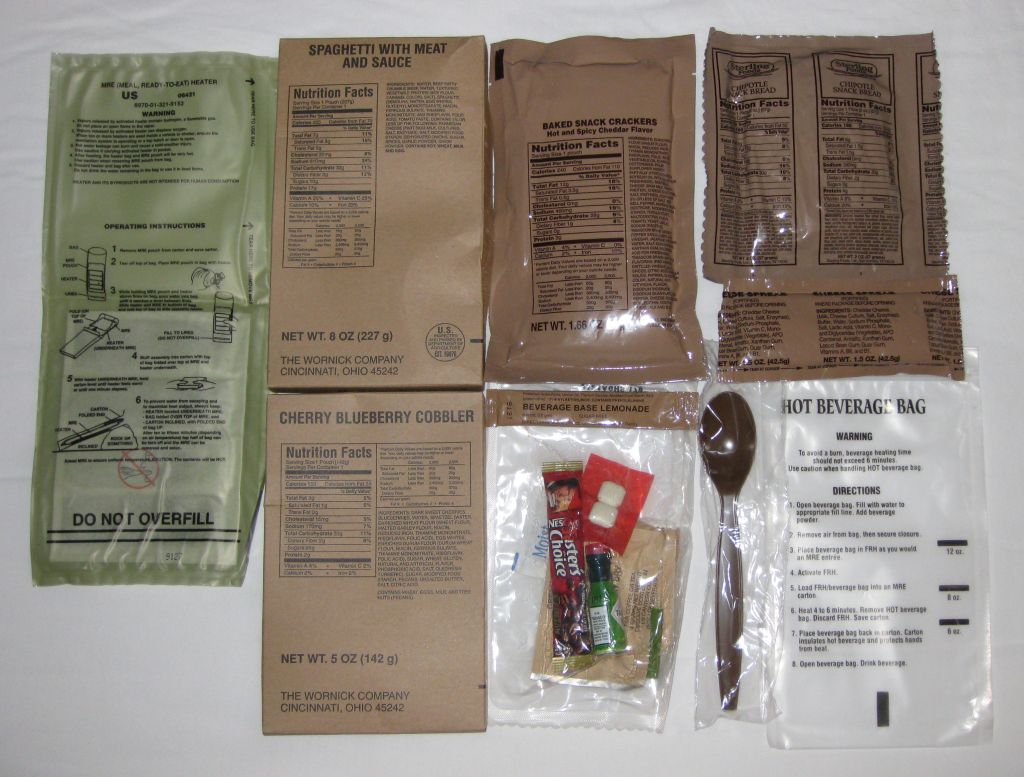 Like freeze-dried meals, a typical MRE would contain roughly 1,200 calories, which again means three MREs per day would roughly satisfy the energy of many hikers/bikers, depending on how much they hike/bike per day.

MREs are significantly larger in volume than most freeze-dried meals and weigh 3-4 times as much, meaning they’re more difficult to pack. Relying on MREs as an everyday staple for a long-distance hike/bike trip is almost entirely unfeasible. That said, they do their job well and could serve as an exciting treat you can take with you on the trail.

The biggest disadvantage to MREs is availability - outside of military surplus stores, they’re almost impossible to find in-person. If you want to have an MRE on the trail, you’ll probably have to order them online ahead of time, then either pack them from the beginning or mail them to yourself.