Now well into September, the air has cooled down...barely. In the meantime, it gets dark almost an hour earlier. It doesn't seem fair to lose that much daylight without losing any heat.

Luckily, improvement continues. On any given route, short or long, my average pace has decreased by roughly 10 seconds/km. Another 10 or so is as fast as I had hoped, and there are still five months of training before the Tinajas 100k.

My old shoes are on their last leg, now up to 900 km. The left one's upper is about 80% separated from the sole, still connected at the toe and heel, and the right one has begun the same process. You mostly can't tell when you run, so I'm sticking with them until the 1,000 km threshold before throwing them out.

In the meantime, the new shoes, which I currently use once a week, are GREAT. I may have picked a half-size too large, and upon first trying them out, they felt a little too cushy. But after checking the pace of the first few km, it was obvious that I run well in these. It might simply be the result of being new instead of old, which usually makes you bounce off the pavement with a little more spring. But regardless of the reason, the new shoes are a welcome change.

After dropping about 1 kg per week during August, I've plateaued in the past three weeks. Another 2 kg or so would be ideal before I'd begin to wonder if I'd lost too much. The past few weekends have all had a special occasion one way or another (including a birthday), so once a normal diet resumes, we'll be back in the business of shedding mass.

I've started considering running the Bandera 100k, for no other reason than its cool belt buckle.

January 7, only about three months away. By then, I should be logging 150 km/week, but I'm not sure if that's enough.

Speaking of which, I still don't know what amount of training you're "supposed" to do for a 100k. Suggested marathon training plans are fairly consistent: 80-100 km/week, a long run of 30-35 km, one rest day per week, and fill in the rest of the training days with runs in the 12-20 km range. But for ultra distances, I've seen people recommending extremely bizarre routines, including only running twice per week and mostly weight training instead. Some people suggest doing a 9-10 hour run once per week, covering as much distance as possible in that time. Running back-to-back marathons on the weekend seems to be a popular idea.

Instead, I'm sticking mostly to how I train for a marathon, only more: 6 runs/week, one long, one short and fast, and a bike ride on the day off. Eventually, I'd like to get the weekly distance up to 160 km and my long run up to 60 km.

Since it's earlier than I'd prefer, I might consider Bandera a training run of sorts. I don't expect I'll do well, and it appears to draw a competitive field. Since there's little chance of winning, I might simply train through it without tapering, show up, walk a lot, and go home with a medal and a little more knowledge before taking on Tinajas, which I stand a chance of winning. 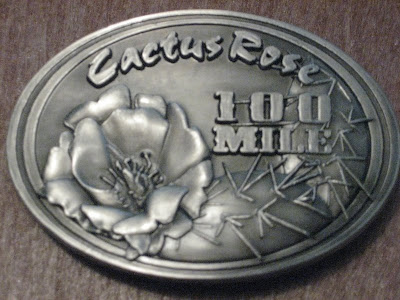 But unfortunately, it's in the fall. That means you have to train through the summer. Not only is that almost impossible in Texas, but that means I'd have to give up a bike tour or hiking trip or something equally awesome, all so I can pay $150 to torment myself for 20 hours and receive a belt buckle. Nahhhh...