So I've signed up for my first 100-mile ultramarathon.

It's mostly what it sounds like. Lace up your running shoes, line up at the start line, ready-set-go. See you in 100 miles.
Sure, you can stop to rest, eat, drink, use the bathroom. You'll have to, at least a few times. You can take a nap if you want. But the clock will keep running.

The race I've chosen is the Cactus Rose 100, held in Hill Country State Natural Area, just outside of Bandera. The same location, and essentially the same course, as the Bandera 100k I did a few years back, which remains the farthest I've ever run. So at least I'm familiar with the trails.

One of the oddities about the course is the sotol. If you're not familiar, Texas sotol is a type of cactus, about the size of a large beach ball, which grows long spiny fronds that reach out in all directions. Sotol grows like crazy in that area, including across the trail. You're forced to run through it like a saloon door for hours on end, and it tears into your shins all the while. And if you're short enough, your thighs, too.

I've been thinking of using calf compression sleeves, mostly as a shield from the sotol, but I don't know which ones to buy. They're not cheap, and normally I prefer to wear as little as possible (it's warm here, after all). But supposedly they make fatigue set in more slowly, in addition to providing protection from the vicious cacti. If I knew which ones work and fit best, it'd be easier to take the plunge.

I'm facing a similar dilemma regarding which shoes to wear. I go fairly light for marathons, usually a shoe in the 7-8 oz. range. I'll probably need more cushion and support for this kind of race, considering it's nearly four times longer, but wearing heavy clunkers only trades one problem for another.

There are a few shoes I have my eye on, but I wish I could try them out and see which are best before dropping $150 on any of them. I live in a small town without a running shoe store, and any stores within an hour's drive barely have any trail shoes, so I usually have to pick something online and hope for the best. Considering the stakes this time, that's a big risk.

Neither my watch nor my headlamp has a long enough battery for this race, so I'll probably need to buy those again, too. Sheesh, this race is getting expensive...

While I've had success in marathons and ultras in the past (those nine course records didn't break themselves), I've never attempted a 100-miler because I could never find one that satisfied four important requirements:

Unfortunately, most ultras have cartoonish belt buckles and/or have way too much writing on them. The Cactus Rose, in contrast, has a belt buckle you'd wear. 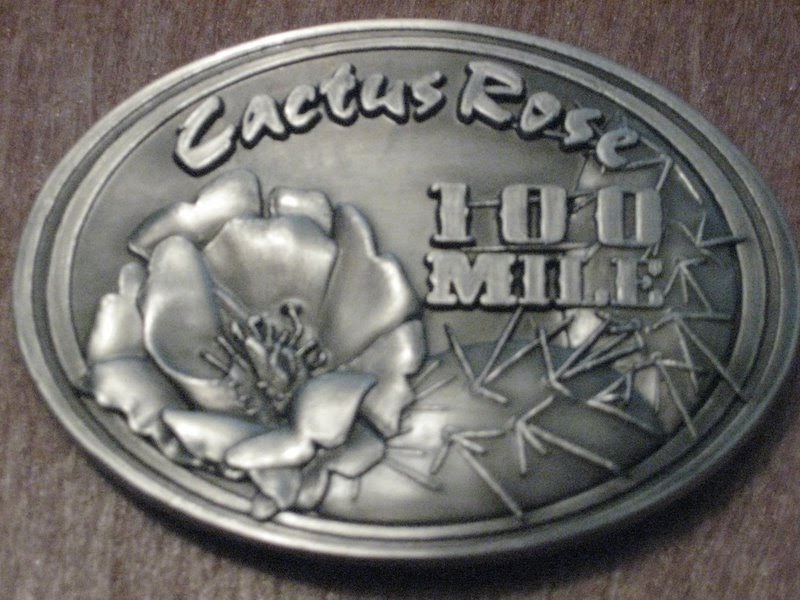 The Cactus Rose has always satisfied requirements #1, #2, and #4, but until recently, October was a bad time of year for me personally. October's a good time of year overall, because the weather should be reasonably cool, fall isn't a rainy season, and compared to winter, you'll get about one more hour of daylight (even the professionals don't finish 100-milers before dark).

October never worked for me because I normally disappear on a long hiking or biking trip until school starts again. But because of, well, y'know, I've cancelled this summer's adventure (mountain biking the Pony Express Route). So now I have five months to train, compared to the two I'd normally have starting in mid-August. Only problem is those five months are the most brutally difficult during which to train in Texas.

It's gonna be a long, hot, sweat-filled summer. But after working through it, you're bound to come out tougher on the other side.

jerry harp
Check with some other 100 milers about what shoes they're wearing. Are you aware you're being pricked by those cactus spines? I used a wet saw once to cut tile. I wasn't aware at the time that the tiny shavings were pricking my hands. Did the next day.

Coyote
Yeah, that's my legs after the 100k on the same course. My legs normally don't look like that. Believe me, when you run through the cacti, you're very aware of what's going on.