A handful of people have asked about the logistics of running 100 miles.
“What do you eat?”
“Do you carry water with you?”
“How long does it take?”
“Do you get to sleep?”

There’s a lot of preparation and planning that goes into an undertaking like this. Here’s a peek at it.

The Cactus Rose 100 consists of four 25-mile laps over rugged, hilly terrain. It’s held in the same location as the Bandera 100k I did almost three years ago, so I’m familiar with the condition of the trails. What I remember most is the sotol cactus growing across the trail, which you frequently have to run through like a saloon door. By the end of the race, your shins are ripped to shreds.

The Cactus Rose 100 offers minimal support, and due to COVID-19, this year there may be no support at all. Instead, runners are allowed to leave drop bags at five aid stations along the course, spaced about five miles apart. Within their bags, runners will need to fit all their food, water, changes of clothes, health/medical supplies (like sunscreen), and anything else they might need during the run. 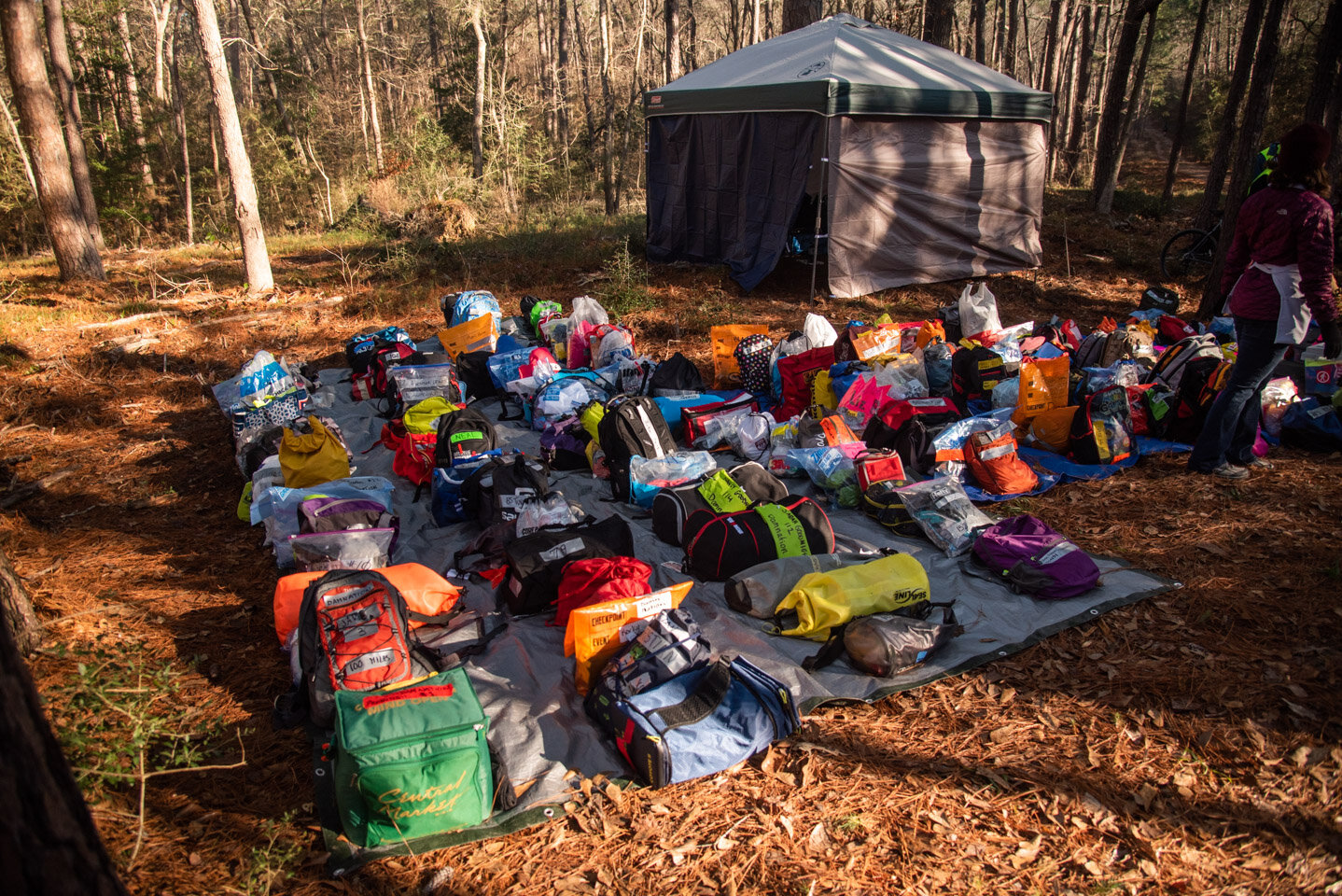 The Cactus Rose 100 has a cutoff of 36 hours. That comes to an average pace of 2.778 mph, which is essentially a steady walk. And that’s what some people do: treat the race as a challenging endurance hike. Yes, you're allowed to sleep (and some people do!), but the clock keeps ticking.

My goal is to finish in 20-24 hours, which would mean a pace between 4.167 - 5.0 mph. Overall, that means I’ll have to maintain a light jog most of the time, but periodic walking breaks are OK.

The best-case scenario of 20 hours means starting the race at 7:00 AM and finishing at 3:00 AM, spending that entire time either running or too physically exhausted to run.

I fully expect to slow down in the later stages of the race, so I’ve made a pace chart that accounts for that. I plan to wear a wristband with this data printed on it, so I can check if I'm on pace throughout the race.

While moving on foot, a good rule of thumb is 100 calories/mile. Interestingly, this figure doesn’t change much whether you walk or run. Running five miles burns calories faster, but walking five miles means you exercised for longer.

You have to eat a lot. That sounds like fun, but there are a few problems with this.

1. If you’ve ever tried to exercise after eating a heavy meal, you’re aware it’s not a good idea. Doing this causes stomach cramps (runners cause this a stitch) and possibly diarrhea. Both of these phenomena will slow you down, due to both a slower pace and frequent stops. Additionally, most runners consider stomach cramps and diarrhea to be unpleasant.

2. The human stomach can only process 300-400 calories/hour. If you try to consume all 10,000 calories while completing the race in 20 hours, that comes to 500 calories/hour. Even if you force food down your gullet, it won’t be properly absorbed, and you’re going to have to deal with a caloric deficit. I’ll probably only be able to consume 8,000 calories during the race, leaving me 2,000 calories short. That’s roughly the same energy deficit as an average person eating absolutely nothing for a day.

3. When one body function is demanding an abundance of energy (in this case, running), your body will slow down other functions to conserve fuel. These other functions can include digestion, which, ironically, results in receiving less fuel.

The best thing to do is try to eat food that’s calorie-dense, so you can get lots of energy without physically filling up your insides. That’s easier on your digestive system, and as an added benefit, you spend less time eating and more time running.

To get through a marathon, which only takes a few hours, all that’s necessary is a little extra energy. Simple carbs are usually the way to go.

In a 100-miler, which often takes over 24 hours, you’ll need all the nutrition a human body normally gets in a day, and then some. It’s important to eat a balanced diet that includes fats, proteins, and fruits and vegetables. Ideally, in a compact form.

The majority of my food will be a concoction I’ll whip up, including oatmeal, quinoa, almond butter, coconut oil, chia seeds, and unflavored sport drink. I’ll leave this in four of the five drop bags, and in the other one, several pieces of fruit. In case I feel I need to eat more, I’ll toss a granola bar and a gel in each bag for backup.

How much water a runner needs depends on lots of variables, including temperature, pace, the runner’s weight, and many more. There’s not a strict formula for how much water is necessary, but in the course of 100 miles, it’ll be more than a little. In each bag, I plan to leave two liters of sport drink. One of the liters in each bag will be slightly caffeinated, so in the second half of the race, I’ll be on a slow caffeine drip, to keep me alert in the wee hours.

Many runners carry food and water with them throughout the race, in a hydration pack or fuel belt. I don’t.

Obviously, what you wear depends on the weather, but late October in Texas isn’t particularly cold. Chances are a tank top and running shorts are best, but a short-sleeve or long-sleeve shirt after dark isn’t out of the question.

Regardless, a change of clothes can feel like a fresh start, so I plan on a complete wardrobe change at least once during the run. New shirt, shoes, socks, everything except the shoes...and I’m bringing a backup pair of shoes just in case the first pair starts to bother me.

I’d consider changing clothes after each lap, but that takes time, and the clock keeps ticking. Chances are I’ll change at the halfway point, and after 75 miles, I’ll go based on feel.

In this race, runners are required to carry a mask with them and wear it while passing other runners. I’ve been trying out various masks to see which works best for running, and different methods for carrying them.

And here are some other things I plan to bring, for various reasons:

Here’s a full list of what I plan to put in each aid station bag.

With a race plan mostly set, I’m starting to make plans for the day after. It involves sleep and copious amounts of questionably healthy food.